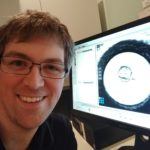 Lecturer in Physiology - teaching medical students about the body and how to study it!