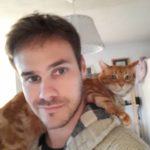 today I'm meeting with young peoples groups to promote the www.oxfordARCstudy.com to help investigate mental health in teens during and after lockdown